At the heart of the community

Welcome to our fundraising page!

Lots of lovely people have volunteered to raise money for Caerphilly Workmen's Hall, so we decided to make it easier to sponsor them.

Just find the event or person that you want to sponsor and make your donation.

Thank you to all our fundraising volunteers and to everyone who sponsors them.

On Sunday 6 October, Kathy and Philip Lye (our Chair and our Secretary) are going to run the Cardiff Half Marathon to raise money for the Hall. 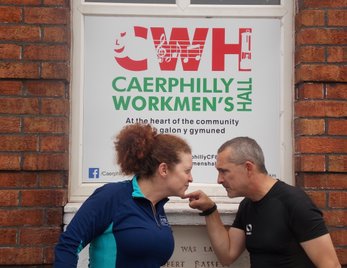 Kathy was injured last year, so the challenge wasn't completed (although Phil claims that he still beat her to the finish line).

So, once again, who do you think is going to get to that finish line the fastest?

If you think it's going to be Kathy, sponsor TeamKathy below and share your support for #CWHTeamKathy on our social media.

If you think it's going to be Phil, sponsor TeamPhil below and share your support for #CWHTeamPhil on our social media.

When the Players were looking for a new venue for their performances, Ian was involved in discussions with the committee to use Caerphilly Workmen’s Hall.  That was when he fell in love with the building and decided that he would like to be involved in bringing it back to the community.

He joined the committee and very quickly established himself as a useful member with great ambitions for the Hall.  When Ken Brimble retired as Chair, Ian seemed the natural choice to take over and he promised to dedicate his retirement to the job.

As with everything Ian undertook, he chaired the committee with boundless enthusiasm and managed to ‘volunteer’ a number of his Caerphilly Players colleagues to join the committee.  It was Ian that encouraged us to organise our ideas into a business plan so that we could present our ideas clearly to funders.  It was Ian that kick-started the plans for our events programme.  And it was Ian that inspired our desire to give the Workmen’s Hall back to the community that built it.

In March 2013, Ian passed away after a short fight with cancer.  We were devastated, but determined to continue his work.  In his memory, the committee set up the Ian Macdonald Memorial Fund to raise money for improvements to the Hall.

Already, over £500 has been donated to the Memorial Fund.  We are hoping that we will be able to raise much more in memory of our Chair and beloved friend.

A Night of Queen